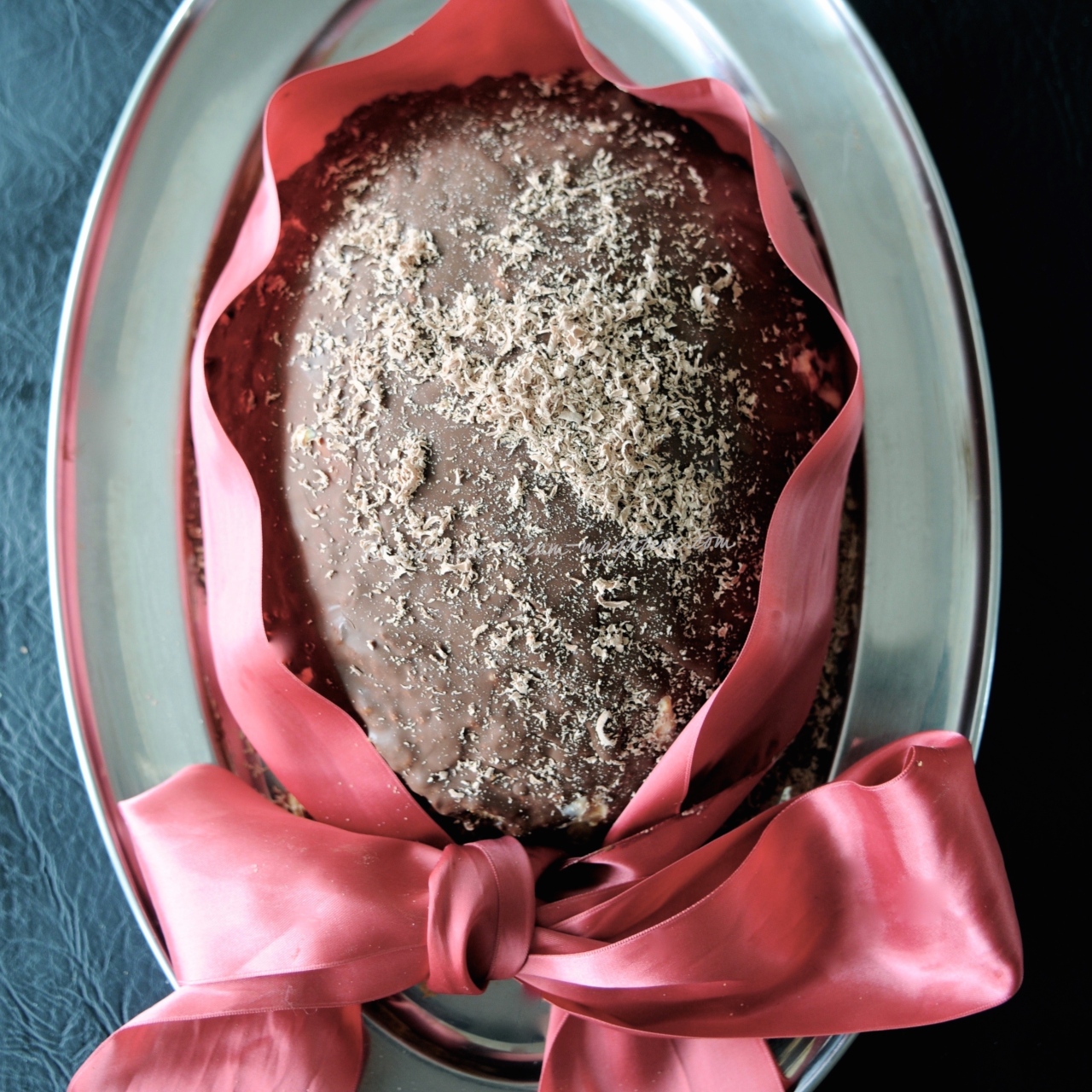 Ones culinary disposition toward the ‘lob it all in’ method in combination with the’ I need to get a wiggle on’  gifts a swift frozen Easter dessert. The Easter bunny has lost his ribbon bow tie and is now looming large in my direction. This is, as I’m sure you will appreciate, a work in progress for Easter Sunday…… 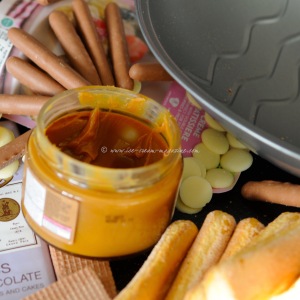 I find food blogging refreshingly honest, I’m drawn to its charm. Brewing an idea, here and there, certainly dissipates the tauper of long car journeys and stimulates the larder of my mental gymnasium. During one such journey I recall listening to an article on the radio by a culinary king/upstart-hooray-cove who edits a food magazine. I’d been toying with the prospect of a blog or similar for a while and thought he would be of interest. Through his charm offensive, read that as you will, I found the impetus.  His trite, superior attitude spurred me forward. “All those pathetic food blogs that no one ever reads…..”  Well, Mr Opinionated you shot your self in the figurative foot! Exit stage left, she flounced off in a flurry of petticoats. 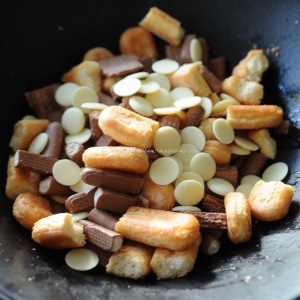 The prettiness of his conundrum has unravelled over the last couple of years, and proved him, to my  mind, to be thoroughly wrong.  There is a rich collaborative of good-natured, talented and deliciously amusing bloggers. A particularly kind malaise of fellow bloggers who continue to prove him so!  (I do find it difficult to type with my hands on my huffy hips – don’t you?) 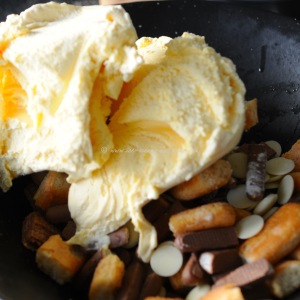 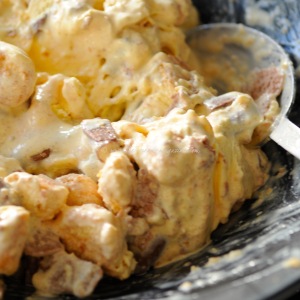 With his pretence in mind, the facile “Don’t bother blogging” magically crumbled. To we armchair bloggers there is a joy, a jolly and gifts of indeterminable pleasure…..  To my perception: Real people in their day-to-day culinary pursuits from around the globe, its fascinating – discuss?

As of today, yes April fools day, the little blog is two whole years old pejoratively thanks to him, but also you.  I tiptoed in, was warmly greeted and have been ever since, for which I thank you unreservedly. x

Jolt! Well, err, yesterday I realised it’s not only Easter (and I have a houseful turning up) I had mentally promised to make an Easter-teric as well as esoteric post-to-self today. Gulp!

I had ‘ turfed out’ a cupboard or twain in preparation and found half packs of biscuits, wafers, boudoir and chocolate fingers with no reason or rhyme other than aimed at my hips.  The end of a jar of caramel sauce, same of some store-bought chocolate truffle gloup. Pity knows where the white chocolate buttons came from and similarly other bits and pieces.  These’ sundries’ were surely pleading to become some form of ice cream, maybe rocky road kill?

I pour a ‘liberal amount’ of Orange Brandy over the now broken biscuits (Note: taste for quality control utterly essential ) and added a couple of spoons of softening No Cook Vanilla ice cream, then a couple more and so on….

Once piled into the (lightly greased with coconut oil) pan, subsequently plied with the salted caramel sauce and then the dark truffle chocolate gloup. Which I don’t anticipate to set. 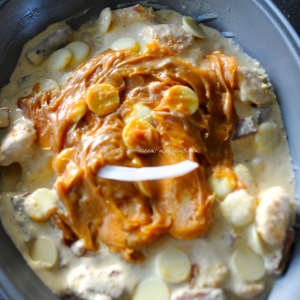 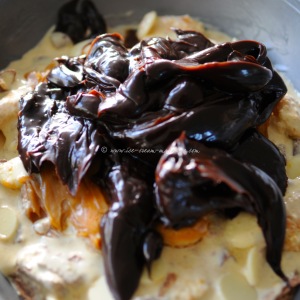 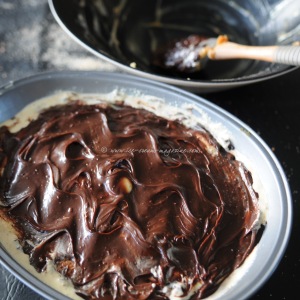 A precarious balancing act saw the ‘object d’art‘ to it’s over night stay in the frozen hotel other wise known as the freezer.

To a pack of finely ground digestive biscuits, add a decent pinch of salt and mix with melted butter. The now frozen ice cream ( yes of course I tasted it, just incase) needing a contrast of texture and a base to partly counter all the sweetness but also offer some support. 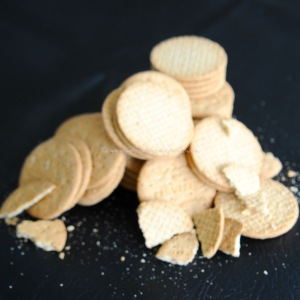 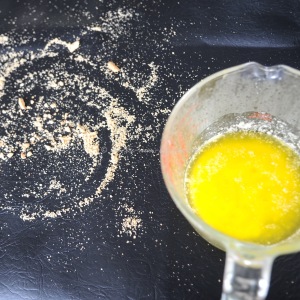 Once covered and re balanced in the freezer, a handy pack of frozen veggies were cunningly placed on the top to aid the rapidity of the setting process. I gave it about an hour to set. 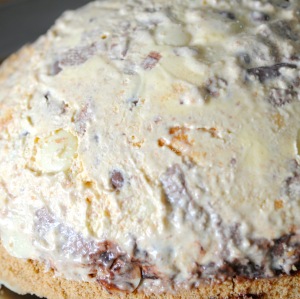 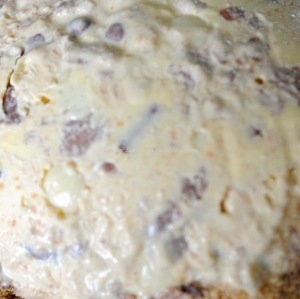 Once again removed from the freezer, and after about 5 minutes, it ‘turned out’ comfortably (the biscuit base a little bashed as it glid out of the freezer and the whole thing landed on my foot! Ha Ha April fool! Yes, thanks for that).  On to a platter it went (well most of it) where upon I lobbed an entire bottle of Chocolate magic shell over the top, it morphed into an easter eggy looking thing.  Maybe with a hint of Bow Beep saying mirror mirror on the wall but we’re loosely on track? 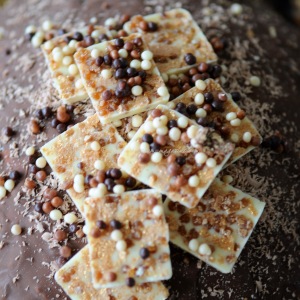 On Sunday it will become bedecked with untold chocolates and more.  I will endeavour to take some further pictures to add. That said my lot are like locusts when it comes to chocolates and ice cream but you never know the Easter Bunny might be on my side? Umm, likely not when he finds out I nicked his daft pink bow!

With every good wish for the season (particularly to that nice Editor chap).

Sincerest thanks for your company, as ever.