Cheesecake, blackberries ice cream? The point of our autumn fruit harvest, and subsequent bag, tag and freeze, is so as we can now deploy the goodies to cheer the end of wooly winter? Hardly a toil? The late summer disappeared into obscurity but now this small task can be considered as a good use of, a benevolently, warm afternoon. I respectfully introduce the love child of cheese cake and frozen berries.

A long cold spell here certainly inspired our recent, impetuous escape. Within 24 hours the tickets in the grasp of my chilly paws. I grabbed ‘um and we disappeared touts suite. The hotel (in the style of modern lush), had more stars than I could chuck brick at (if I so desired). The service:- “Just lie down and I’ll breathe for you Madam.” 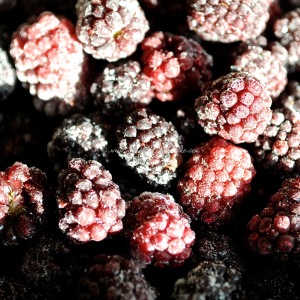 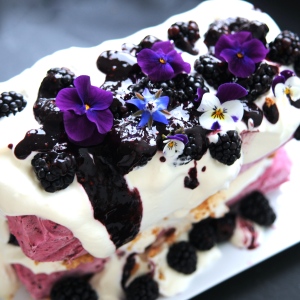 Unravelling the contents from an airport cosmetics heist, I found myself listening (in limited German and then French) to a multi lingual bidet from the far side of the bathroom. Pleasantries were exchanged and I returned to our lounge as our phones jangled with messages, mails and all the usual mayhem. The Tea Boy had taken the opportunity for a ‘livener’ and hit the Champagne. A glass in one hand, he was taking a business call….. Well, there’s nothing quite like getting away from it all eh? An impeccably dressed, suave suited, member of staff then arrived to escort us to the managers drinks party which spilled into supper, after which we were retired to a cocktail bar.

Not an arduous journey, but we were tired from travelling.  I had completely forgotten the maverick, multilingual bidet until I could hear the Tea Boy brushing his teeth and chatting in French with what/whom he later described as a French Ghost. “The bathroom is haunted by,” and I quote, “a really nice French chap from Toulon”.

“Toulon” ? The Tea Boy asked when he died and the ghost, was delighted to report that he was indeed still vaguely alive, just in another place. Our Tea Boy was absolutely overjoyed and utterly chuffed that he’d resolved that troublesome ‘life after death’ scenario, all was one with the world. Muttering on in his jovial way…  “Fancy that  “A french toast from Goo-lon, well, well, who ever imagined… ”

Drinks had been taken, his head it the pillow and he was out for the count.

Tired?…. sleep? No chance. A French toast from Goo-lon indeed?  I nipped back to the bathroom and closed the fosset and plunger since, like you, I had surmised that the communication was through the plumbing (fortunately not in parcel-tongue). Our beloved Tea Boy would not be deterred in subsequence and discretely arranged for us to be moved the following morning.

From our new digs we found ourselves over-looking a ‘picture postcard’ marina. A pot of Earl Grey and a slice of blackberry cheese cake (spied earlier) softened the journey. The Tea Boy wrestling with his second glass of red. The slice of the emollient cheese cake was an unctuous joy and duly inspired this post.  Hence my Blackberry Cheesecake ice cream, which has morphed into a big hitter with all who have tasted it. Simplicity itself, no need for an ice cream machine and it uses the ‘lob it all method’ which inclines me to share it with you.

A teeny flay of salt

A splosh of vanilla and a big splash of maple syrup – whoosh together.

Whizz 500 g of frozen (like little hockey pucks) blackberries and let them rattle and battle until a frozen mush. 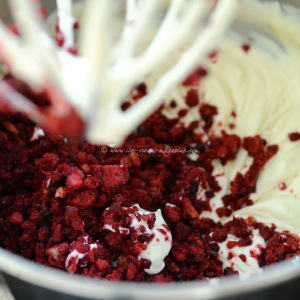 Using my smaller food processor because I have a frightful allergy to hauling out the larger machine unless absolutely necessary. The washing up notwithstanding.

The first whizz, not so mushed, for texture and the second batch left for longer to give a finer, icy texture and rattle percussively.

Combine all to a very satisfying, yummy, berry, cheese-cakey, ice creamy goo. Taste and adjust to suit your palette. 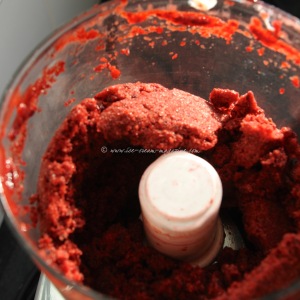 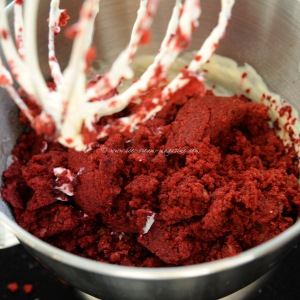 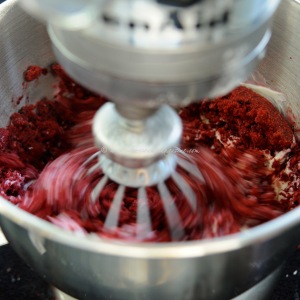 If you work swiftly and make a small batch it can be served straight away (I know = hurrah!) Oops, I digress by way of a change.

Half line a couple of loaf tins with grease proof paper, the riven look given by cling wrap reminds me of cellulite so I avoid.

Distribute the blackberry cheesecake goo between the two tins and abandon to the freezer over night. Gloat…..to self.

You may well wish to smooth and make perfect but the ‘haphazard’ avoids any hint of ‘store bought’ pretension. 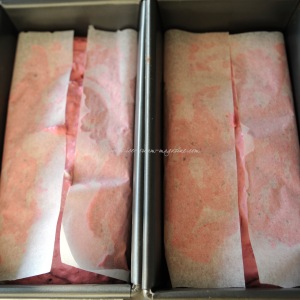 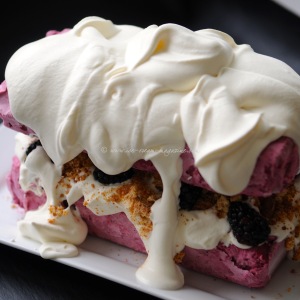 The dilemma: Its acrylic pink! (not so, just a rare flash of sunlight) Emergency Options:  Sculpt a flamingo? Nope. Chop it up, shoehorn great wedges into ice cream cones. Nope. Let’s say its ‘Contemporary’. Then just splash and splatter as you wish. Bizarrely the more ‘haphazard’ the more and oohs and ahhs?

Lastly, to a magnificence of softly whipped, vanilla infused, cream layer crushed amaretti biscuits (as shown, or of your choice) Dress, douse, dribble, splash and dot with fresh berries and a few edible flowers. Take a spritz of lime juice and pulse with a few more berries, together with a waft of icing sugar. This forms a dressing to paint, dollop and drizzle with continued reckless abandon.

Note: Now become extremely covetous and refuse to share it with anyone, particularly if they say that they come from Goo-lon or the Tate Modern?