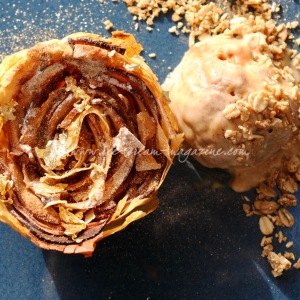 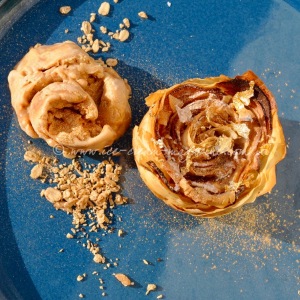 The scrumptious textures of Autumn, a bright morning, the leaves were tinged and beginning to turn as I drove The Tea Boy to our respective meetings. We later met for a late lunch, arriving just as the chef went on his break. Earl grey for me and Vino Collapso for the Tea Boy. (All good, he drinks, I drive) I questioned the availability of the dessert menu?

We ordered their glorious Strudel. Whilst most menus come to an abrupt end …. served with custard, cream or ice cream like its some cursory ‘add-on’. The very the cheek of it.  We were served a warm, gentle cinnamon vanilla sauce (err..custard?) and pleased about it too. 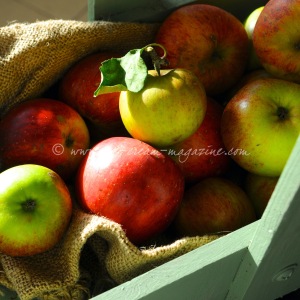 Our buxom, goth frau in her huge flouncy frock and DMs was a joy. Her co worker, equally charming, tall, gaunt, blonde guy struck as a counterpoint to the eye. Although svelt his lederhosen were wincingly tight, embroidered  ‘orchestrated‘ hide that creaked as he placed the strudels before us. I preempted the Tea Boys attempted at a wise crack (if you’ll forgive the oxymoron) with a swift kick under the table. They simply looked like models from a Black Forest cuckoo clock.

For context. A dear departed beer swilling, rally-car friend, Adam, sadly lost to the last century. An affable, guff-able, kindly, fun chum too often ‘into his cups’ and rarely sobered. They were a cracking crowd.  Falstaff ( portly/accounts )  Glorious glorious (fix and mend anything mechanical)  Gorgeous Steve the first ( thump it/ weld it ) Squeaky cheeks (Adam) owing to the adverse affect of beer upon his digestive system.

We gifted honorary aide memoire titles.  Brunhilde and Squeaky the 2nd which until this moment we had kept entirely between ourselves. 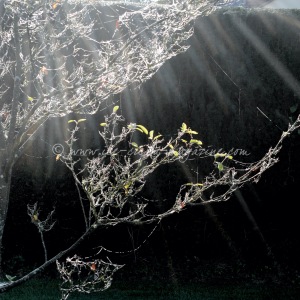 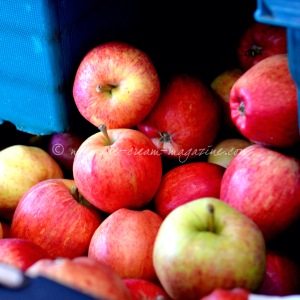 The following morning through inky, velvet shadows the option of waffles brightened the day using our shiny red apples. Duly chopped and bathed in maple syrup then topped with crunchy walnuts before being doffed with cinnamon sugar.

That weekend a couple of chums were arriving for an impromptu brunch-thing hence further echoes of Brun and Squeaks.

Finely sliced apples were very swiftly rained upon by the juice of a lemon. Single sheets of filo, haphazardly cut into strips, ineptly slithered and slathered with melted butter.  A mooshy-mush of peeled, chunked, sweet/acidic bramley apples that considerately collapsed and softened after a few minutes in the microwave (furthermore they produced a lovely juice which I immediately designated for martinis).

To the cooling drained apple the addition of ground almonds, tiny splash cognac and a tickle of vanilla extract. 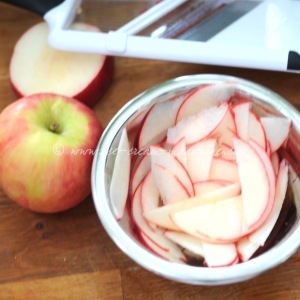 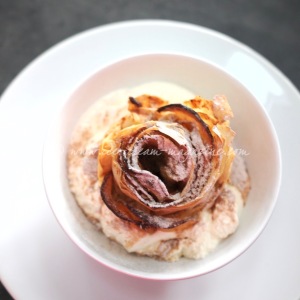 Realising the exterior edges were a tad under buttered, the application of emergency coconut oil spray, phew.  Wrangled them in to the bun tins and then walloped them into oven as chums drove up the drive… whoop whoop. 6 made in 7 minutes – medium oven (bottom right Aga) 30 minutes later, freckle with left over gold leaf, yup that’ll do.

Martinis were made in 2 minutes … disappeared even faster. Oi! Where’s mine!?

The ice cream is as embarrassingly easy as it is unctuous.  Phaph with cinnamon infusions, dulche caramels and eggy custards as you please or as a swift alternative…. most of (blush) a 500g finest quality, store bought custard, 2 teaspoons of recently purchased ground cinnamon, and a small can of caramel condensed milk.  Combine (as in … simply stir the 3 ingredients together). I chose to leave little blobs of the caramel. Simply freeze in a suitable container. 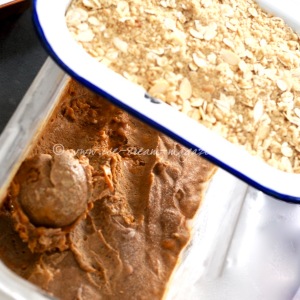 Other uses thus far for the ice cream are to weld meringue kisses together and also as an ‘add-on’ to a nutty-fruit crumble. 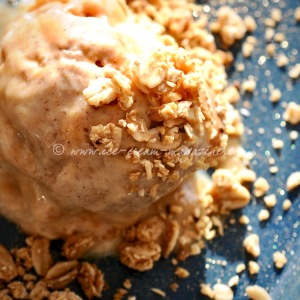