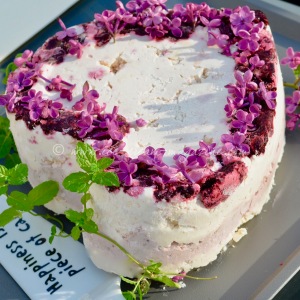 Gastro-tourists chums arrive in anticipation of fabulous flavours, and we duly watched them melt on the terrace. The temperature, on said terrace, hit a sensational 30 degrees. fyi yesterday a meh, remonstrative rainy, naff 9 by comparison. Likely why we ‘brits’ are always banging on about the weather? 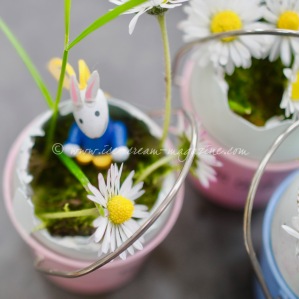 Instead of musical chairs the majority played musical umbrellas, courses and finally desserts came and went. Dopey here realised she’d spent quite some time making cheesecakes but every one seemed full to “pussies bow.” and they became a tad redundant, loosely the recipe of said cheesecakes.

Phase 1: Bouffy blackcurrants from the obliging garden, frozen last autumn. A buy 3 and get 100 free option on cream and cream cheese, a couple of previously opened packets of digestive biscuits (no one cared that one, mortifyingly, sacrificed her half pack of ginger nuts which were added for good measure).

I found the bottom half of a bottle of champagne (?) only one glass had been taken (?) Similarly two thirds of a bottle of Posh-Oh Prosecco from the previous day. (A dear, darling chums tum is champagne intolerant, she loves it – it hates her.  Echo strawberries, poor gal.) 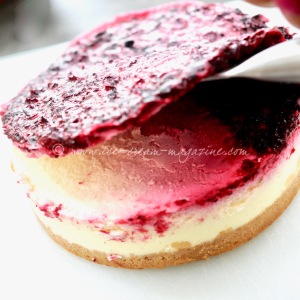 Heck, twenty minutes-to-five, is that the time? Digress? Moi? Nah?

… back in the room with a pack of veggie, black currant jelly (dissolved in a scant cup of water in the microwave), a few cups of the frozen blackcurrants, a jolly decent slug of cassis, whizz to a purply, slushy, mushy goo and then gently combine roughly the same (in volume) of your preferred bubbly stuff.  The entrapped bubbles brought a visual rapture to the writer coo … and  yes, yes I know that’s far too much to top a few cheese cakes, please see 1.2:

Phase 2: A few days later … remember whence the cheesecake dwell and wince at ones absentmindedness.

Phase 2.1: Osmosis time: disinter and appropriate cheesecakes, separate layers. Piece of cake, now for the tricky bit … oh so not so. 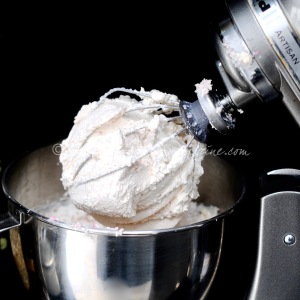 Mix the creamy cheesey bit with whipped cream, break the base into little nibbly bits, loosely chop cassis’d houchie goo.   Note: This could have been a store bought cheesecake, (gasp) yeah really.  I’ve taken and shown photos of the running order of layers as the evolution of the magical, amorphous ‘ice cream makey-cakey’ thing, took shape.  I had no original thoughts of an ‘icy-creamy-makey-cakey’ thing whatsoever. 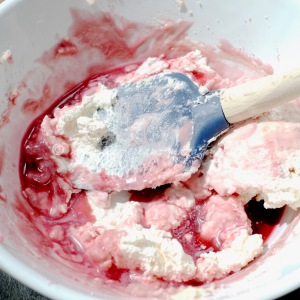 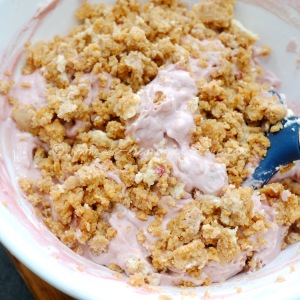 Smoosh cassis with the some of the creamy bit, add the nibbly bits.  High tech / culinary references all the way today. 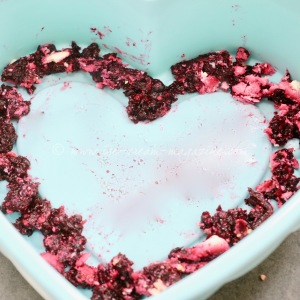 Fruity bits, hither and tither, in their very own silicone valley, best allow the pix to speak for themselves and let’s be honest there no way any of you are going to do this?

Set your version, as I did,  in the freezer. 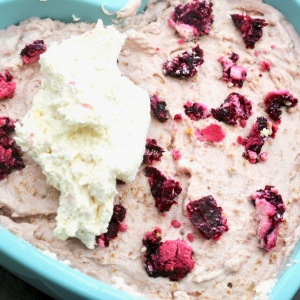 Wreaking with up cycled indulgence and lovingly dandruffed with a cascade of twinkling-purple lilac flowers.

Behold, the super tasty, modern remake of the sword (and distressed concrete looking) stone, I hitherto present a ‘blackcurrant-prosecco-icy-creamy-makey-cakey’ thing.