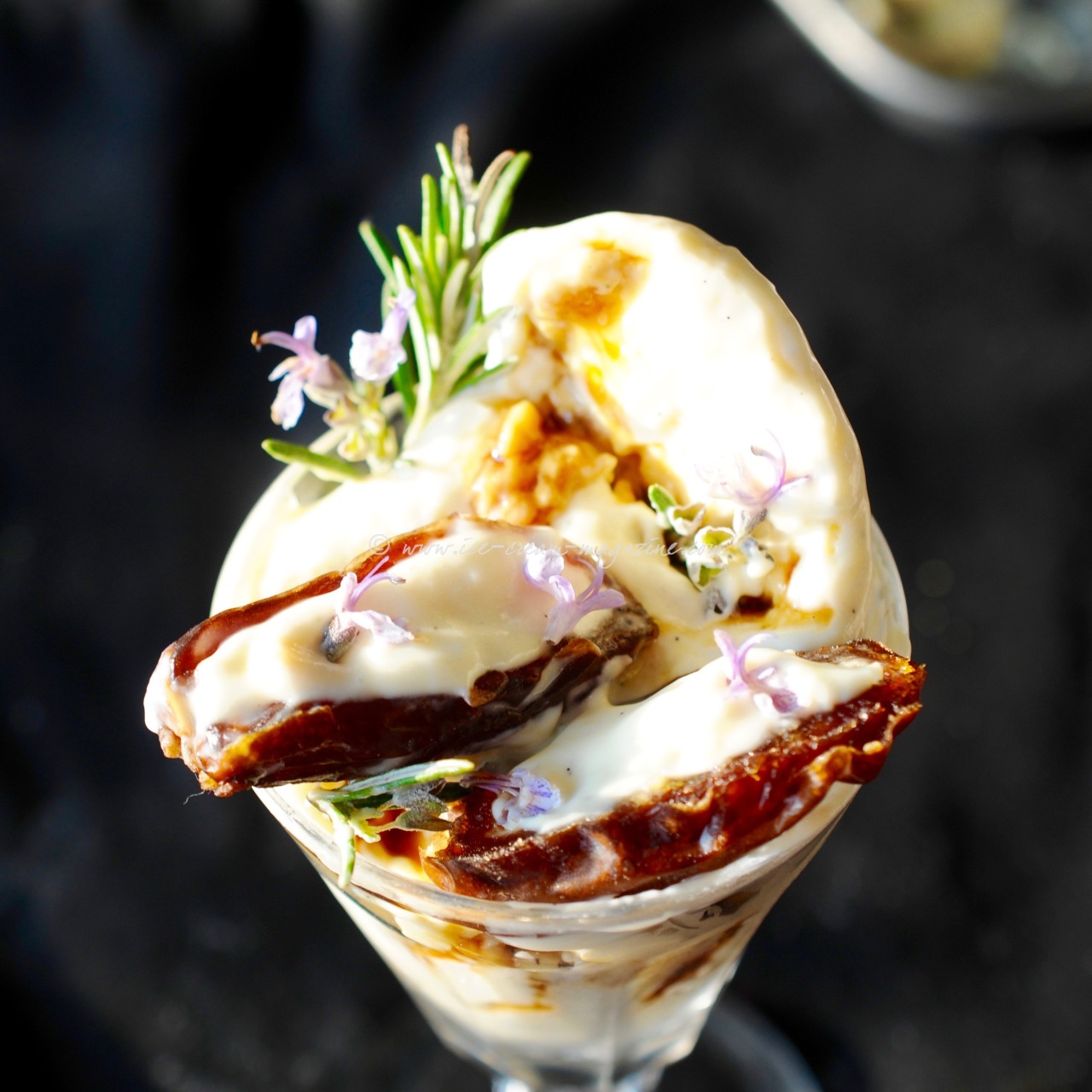 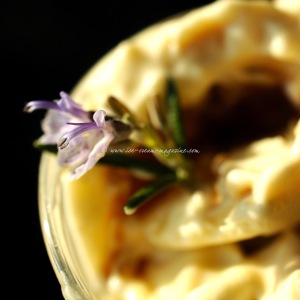 As winter grumbled on, it’s been grim out there, and whilst a hint of spring threatens it just as quickly hides. Tonight we have a progressive supper party with a couple of good chums. She’s making the main, which will include loads of local veg and double dumplings (some with herbs some without – finicky husband syndrome), it will arrive in great cast iron vessel du virtue. Having spent over night and most of the day in her Aga, a more comforting hearty dish and company cannot be better envisaged.

Except for dessert that is….

Attire: We will retain our comfy, country, scruffs,

Table: Fairly bare raw wood: candles will be lit, a crystal glass may tinkle with decent Claret here and there.

Pud:  The few remaining apples from our autumn harvest are looking a little jaded and greasy. Fortunately they remain firm and shortly heading towards a nice warm pastry bed or overcoat, and for some a crumbly walnut gravel, likely both. There will be a warm and voluptuous custard, clotted cream and ice cream, but of course.

The crumbles:- were Bramley apple, zapped in the microwave with lemon and sugar. The crumble topping consisting of butter, sugar, plain flour and shelled walnuts, whizzed in equal measure. I used the whizz, wallop and dollop technique. Edged with pink lady apple slices, to prettify. 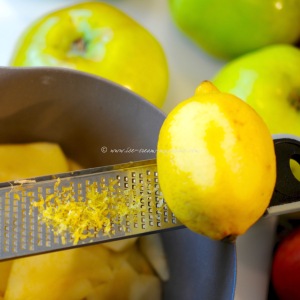 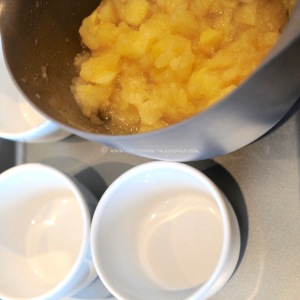 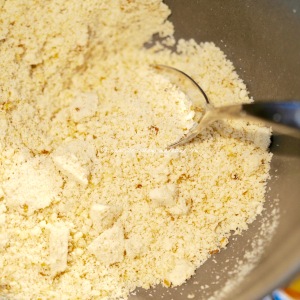 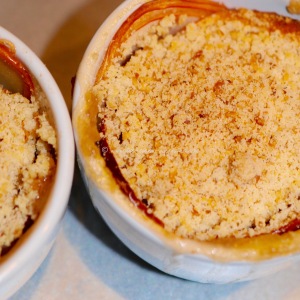 The tart:- sweet all butter short crust pastry, baked blind and then brushed with egg yolk to form a seal, returned to the oven for a few minutes to form a weather proof coating.  The apple for the open face tart was once again a microwaved miracle and left to cool. Soft brown sugar added to the peeled and chopped apple, this was zapped with a shot of rum which cheered the whole situation, once all were cool it became the 2nd layer.

The pretty pink lady apples were sliced on a tuneless mandolin. Once in place were dressed with a combination of rum, butter and sugar then cooked through in the oven. After that?  Gifted a crunchy toffee apple v brûlée top, golden caster and a blow torch soon sorted that.  A tryptic of dessert initially being the base plan. 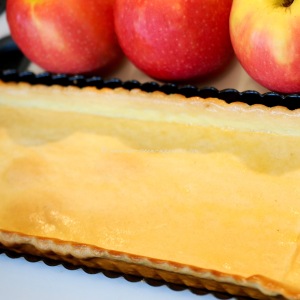 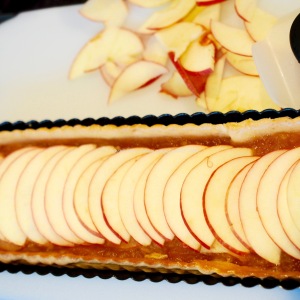 The little tin-tin, toffee apple, tarte tatin-esques, were caster sugar and a drop of water bubbled together and then poured to set hard on grease-proof, rosemary flowers were added. Snapped toffee shards into little bun tins, pink lady slices once again using the cram and ram technique were gifted a sweet pastry hat.  The picture shows why its better to make them ‘up side down’. 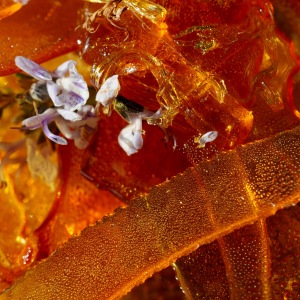 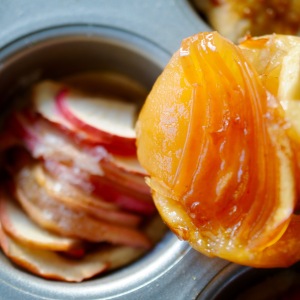 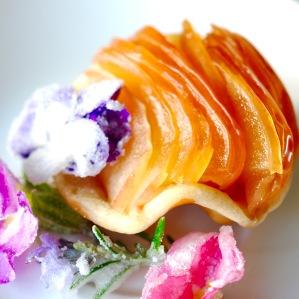 I’m no slave to the kitchen which has become hugely apparent.  So this, by way of a change, uses a store cupboard collective. Becoming a frozen collaboration, which gifts the notion that I have indeed spent the whole afternoon grafting away making custards, leches, churning, sieving, straining and stropping and striving, instead of lobbing a group gloop into the freezer in a thin, yet stylish and suitable dish (baking tray). With everything crossed that it will be suitably frozen in time. If not? “Oh do try this, my thoughts of a soft set ice cream that I’m just testing.” (Ahem!) 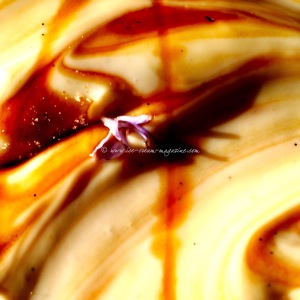 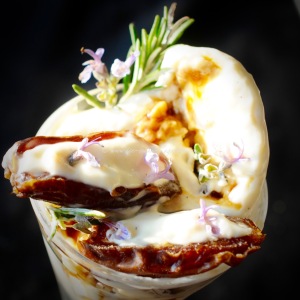 In this instance the tiny flowers of rosemary add pizzazz, amazing depth and fragrance to the mixture, which is simplicity itself. The pretty yet earthy tones of the little flowers are added to emollient silken gloop adding a heady earthy tone to an otherwise very simple mix.

Gently scarify a few fresh rosemary needles if you don’t have the flowers and leave to infuse.

The name Rosemary derives from the Latin and means Dew of the Sea don’t cha know. Also alleged to be draped around the diaphanous Aphrodite when she rose from the sea.

So good enough for our ice cream eh?

Lob finest quality store-bought custard with a can of dulce du leche/caramel, and combine. The custard will have the necessary stabilizers to hold the leche, (which is up there with Marmite, you either love or hate it unreservedly). The cuddly caramel is then gently gifted the zephyr of the pungent flowers, a few vanilla seeds and a very decent squeeze of date nectar. The rosemary and date are old chums, and work wondrously with the caramel ice cream mix.

Stir though to combine and absorb the natural oils infuse and it becomes a much flavoured and fragrant goo. Once throughly combined, leave for an hour and then pour this into your chosen vessel.

Swirl with the delicious and super sticky date nectar as a subtle swirl or raging tempest depending on personal preference. Also this is time to add small chopped pieces of date as you may wish.  Into the freezer it goes prior to the big reveal.

Please note: dates stuffed with rosemary caramel ice cream are great for scooping – and absolutely not for sharing.