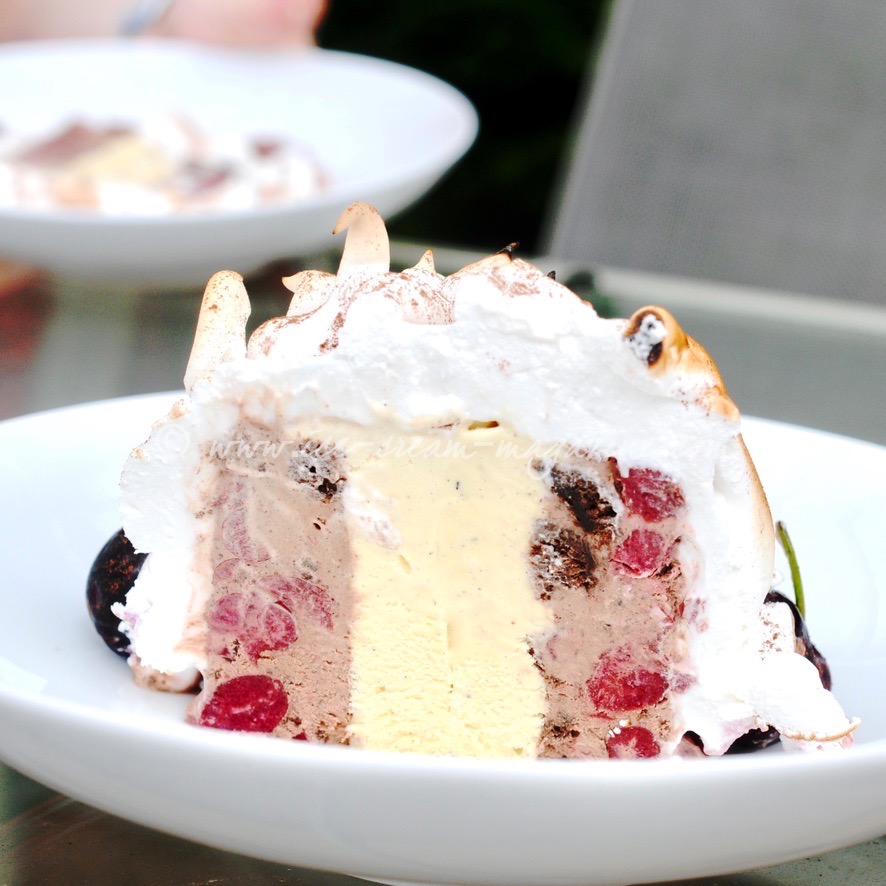 A dear friend  has a morello cherry tree in her garden, truth be told  (and as I regularly remind her) it’s not the only reason that we are friends but… it certainly helps! Shallow? Moi? Correct.

Her next door neighbours young Son hoiks himself up the tree faster than a squirrel, brandishing his ‘shellfish’ bucket, and swiftly filled with the most fabulous cherries. Not at all shelf-ish in fact extremely generous.  This has nothing, what-so-ever, to do with him wanting to play with her brand new, micro-moggie 6 weeks old and ‘in charge of everything’. That’s the kitten not the cherry picker, obvs!

Embarrassed by the (taste tested) diminishing haul, one grabs a pan, and the stone remover thingy and cracks-on.

Once washed, stoned, (tut tut) twinkled with golden caster sugar the cherries were left to retire in medium low oven, (bottom right Aga) in an appropriate lidded vessel. Within less than an an hour there’s loads of sumptuous fresh cherry juice bathing the fruit. I’m confident that gently simmering them on a hob would gift a comparable result and in half the time.

Wowzer. It’s a simple truth that equal measures of said cherry juice and gin became one of the finest happy accidents . . . ever!  Surely it’s part of our five a day?  If you drink enough of this stuff you’ll be able to yodel.

That’s nailed this years boozy festive gifting. Checks irritating app on phone and finds that Christmas is 142 days away! What! Pity sake!

The drained cherries gently folded into lightly softened chocolate ice cream, followed by cubes of a rather vintage brownie. Lob the lot into silicone cake pans and return to the freezer to re-harden. Both ‘tops’ then duly anointed with vanilla ice cream, echo, repeat. 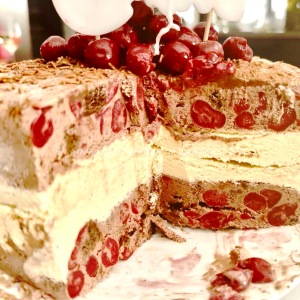 I won’t take you through the ‘blow by blow’ of what happened other than the birthday chaos ‘no cake cake’ was insufficiently finished, it didn’t warrant taking photos.  So with half of the ‘look a like no cake cake’ demolished!  Thinks to self, that I’ll dress the other half and make it presentable for a post, smooth the edges with a warmed off-set spatular, for the’ naked cake’ look. No one will ever notice there no back to it and the taste is after all, very scummy yummy.

A couple of weeks later the wrecking team are due to return.  Kindly consider that there are a few of us that prefer not to be seen with little, or nothing, on their top half other than a scattering of chocolate vermicelli. I am not mentioning cherries and or candle! That’s a totally different genre. Thinks, time for a little postmodernist “waist not – want not” up-styling  … umm?

”Arfur’nice-cream’ gets a second chance, a posh new outfit instead of being seen in his birthday suit.

Typically and all very 11th hour, a cunning disguise (a 4 egg white meringue) badly squiggled over the semi-luna shaped ‘no cake cake’ but this time vaguely reminiscent of a frozen albino hedgehog having a very bad hair day.