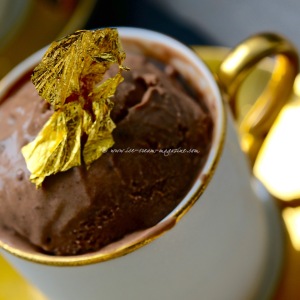 I remain utterly haunted by mauve hydrangea, I wince and shake in my shoes if I hear a cellist scraping a lone melody after all the ‘baroque’s’.  Bespoke suits, for some, were let out. Posh frocks engineered think Toblerone/Botticelli reimagined. 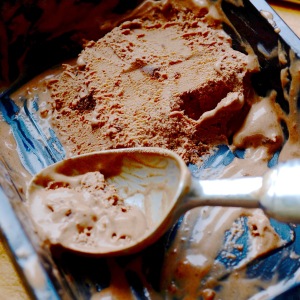 Over thought and over bought, attire was purchased, returned, purchased, returned to the point where the delivery chaps thought I might be coming, needy, weird or have a questionable habit. The event was long coming, some might say well over due, (though one couldn’t possibly comment).  Both the tea boy and I are war-torn, battle-scarred and only now feel I can share. I post amble back to a time that we wish could be forgotten. A matter of due process which, with hindsight, group therapy and time, we should be crowing about it.

My one and only ever volley with red soled kitten heels, (which happened to have shrunk two sizes during their transportation from the United States) coincided with a minor op of “misguided ” injections by:- (and since he missed,  I quote my letter) “Abrasive, hyper, unnecessary attitude with a disturbing lack of calm. A verbally incontinent surgeon whose outburst held no regard for my mindset and more importantly had a despicable lack appreciation or regard for his junior colleagues or supporting staff.

Oh yes, don’t be daft! of course I still chamfered the shoes on, even though they were two if not three sizes too small, principles dear principles! 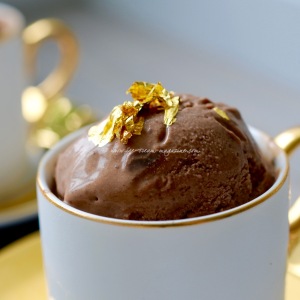 The flotsam of the situation now settling a little and the ache of welded social smiles lessening with time. As also the doctrinal obedience, intellectual misery, split (if not multiple personalities) required.

It’s over, it’s done, the autocratic yet bureaucratic infighting, ruthlessly documented flippancy. The phaph of all the ‘cloy poloy’ sorted by a one woman and her self-induced, chocolate coma.

The fortuitous end being that we have actually managed to marry off number one daughter (just before she becomes of pensionable age too). So the tea boy and I simply sloped away to regroup, since no one else could be bothered to ‘honeymoon’ immediately. We fled, we escaped, we legged it, to permit the dementors to withdraw and fade away back to the time from whence they came.

My salvation came from a total darling, who just happens to be a fabulous friend, chef, all round golden girl, oh and an awesome baker to boot. She plied me with regular doses of  her ‘brownie of all brownies’. (Note: I could drownie in her brownie). She just kept it coming. An edible poultice to the mind, though now one has hips that resemble a relief map of the Cairngorm Mountains .  Suitably addicted I have subsequently involved part of the third, forth, fifth? (Oh numbers shmumbers…) the last of the last one to become the most desirable frozen dessert which balms trauma like nothing else.

The first spoon full, echoes on the palette like the sound of a wistful breeze through the trees, the rustling of a taffeta ball gown, which then blissfully balms.

The peerlessly rich concoction started with my typical resource, a fridge raid.  Where upon one unearthed:- most of a small tub of whipping cream was duly whipped to add some lightness.

Then slithered a 500lm tub of finest quality, store-bought, fresh Madagascan vanilla custard and gently mixed it through.  I happened to have (blush) a jug of chocolate sauce (chef chum fab eh?) which could be easily, (and would have been if she weren’t so fab!) a tub or jar of dark chocolate sauce.  Substitute all these items with what is available or indeed appropriate for you.

Lastly included the last of my last small slab of chocolate brownie which I removed from the freezer, sliced thinly and then broke apart. 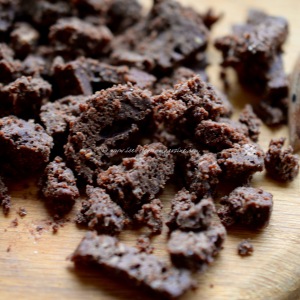 Gently engulf the bits into the goop, (all technical culinary expressions)  trying not to eat too many of them if you can possibly resist. Then try not to eat most of the chocolate custard brownie mix before putting it into a suitable container or ice cream machine to freeze. 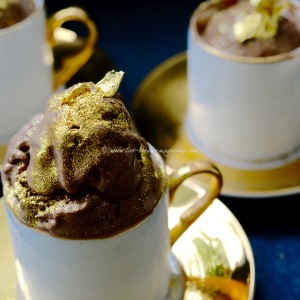 I’ve tried both methods on your behalf  (no end to my heroism eh?).  As both are utterly whoopdedoo, so much so that I gave a tub to Madam la Chef.  Who thereafter gave it her seal of approval! (phew)

It’s a hug of billowy, pillowy, joyously flamboyant (dead simple to make) ice cream, which I respectfully suggest you serve in small pretty vessels, leaving the remainder in the freezer for self. 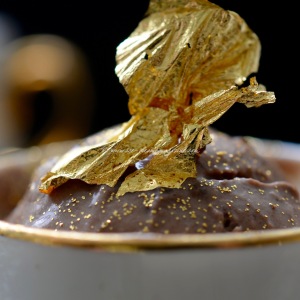 Could always serve it with a drizzle of hot fudge sauce, not for me.

This one is pure luxe and goes commando with just a nuance of summer gold for my golden girl.

44 thoughts on “Chocolate brownie ice cream?…… Oh I should cocoa!”