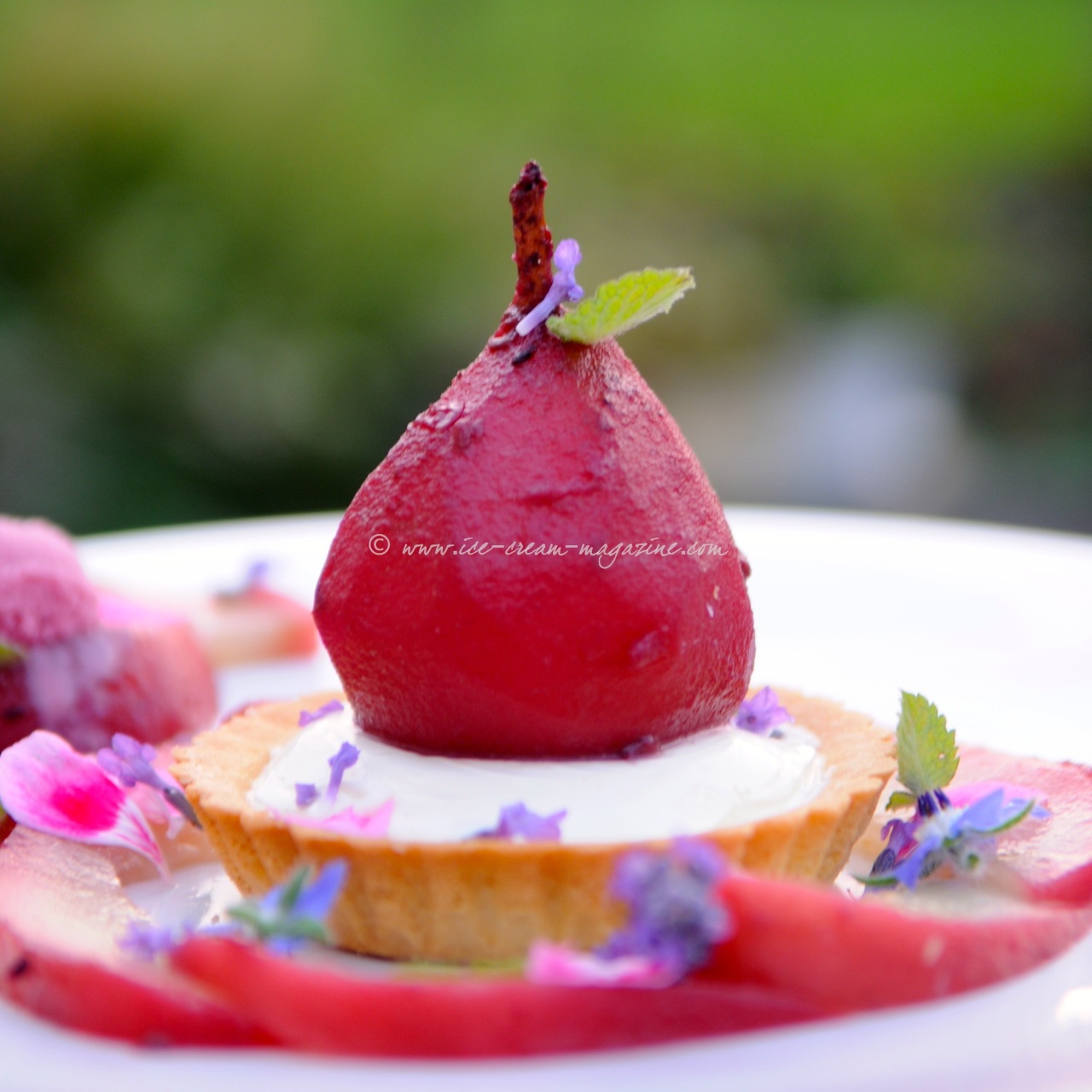 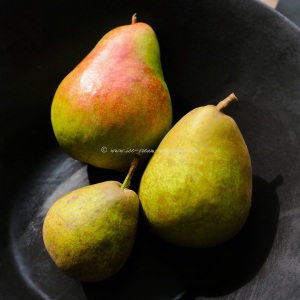 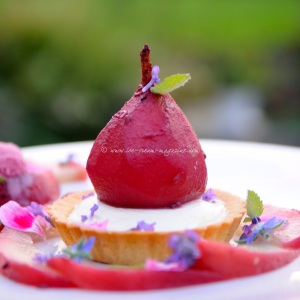 Once upon a time there were three anthropomorphic pears.
A Daddy pear, a Mummy pear and a Baby pear. They resided together with their “faux-aux-pear” a convicted squatter and porridge thief known only as Mouldylocks, (she had pleaded guilty to aggravated trespass).

They all lived together in a little house in the woods. 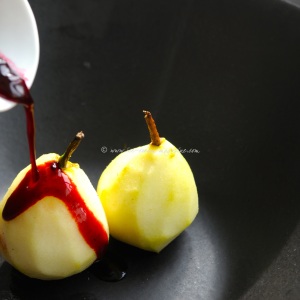 Mouldylocks was berry sad and considered a little lack luster on the house keeping front, this was mostly because she was unappreciated, though glad to have a job doing community service rather doing a stretch in clink. 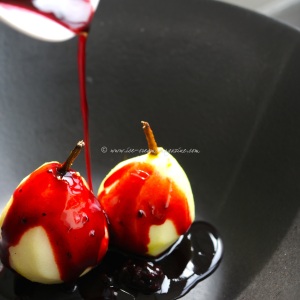 Admittedly she had been the victim of despair but was none-the-less an ‘uninvited guest’ who had helped herself and overstayed her welcome.  Her blackberry battery had run out, and she became lost in the woods. The sat-nag-GPS couldn’t help her find her way home :- “2,a, room somewhere in “Wouldn’t-it- be-shrubbery” at edge of the forest.

She would simply have to remain in situ until she had completed, had atoned, for her misdemeanor. 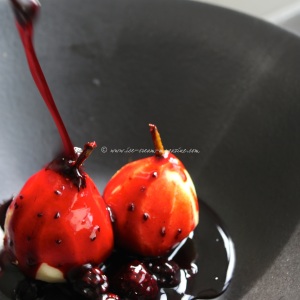 One day Daddy pear said. “Anyone one fancy some jolly old retro porridge?”
“Oh no, not me Bro” said Baby pear.  Just as Mummy pear came in from lummoxing on her sun lounger in the garden angrily saying. “Whose been eating my borrage?!” There was such a ‘to do’. 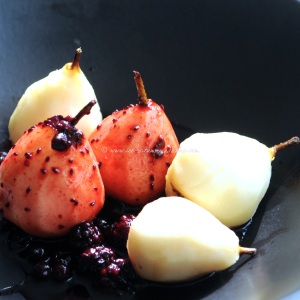 The self-absorbed Baby pear smirked, hoping that Mouldylocks would get the blame. “Ouch” said Baby Pear as Mouldylocks cuffed him around the ear for being lippy, casual and a tad too self-effacing.
The Pear family were smitten and took advantage of having their unannounced ” faux-aux-pear” but these things so often occur in the land of fairy tales as we all know?  The slovenly podgy pears took advantage of Mouldylocks good nature.  She had certainly learned her lesson and dutifully conceded to pay her debt to society. Mouldylocks undoing was a dying battery and we’ve all been there haven’t we? Altogether now … and in true pantomime style “Oh yes we have?” 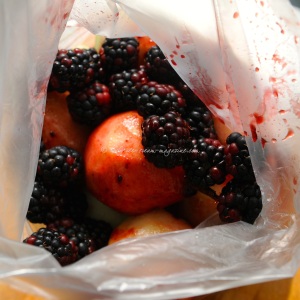 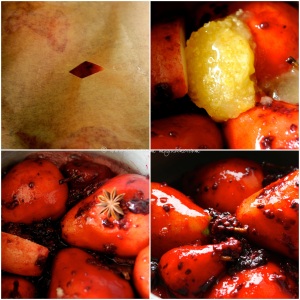 The other woodland creatures, however, gifted her with tender loving care. She was berry grateful to them and had inwardly blossomed from her scatty Chavish ways, despite the pears passive aggressive behaviour toward her.

One lovely autumn day there was a tap on the front door. The Pear family had sloped out for a late brunch. Moudlylocks was left at home alone so she opened the door. “Good morning, would you be Miss M. Berry-Mouldylocks? Is this Barely-there-Lair?”

Slightly taken back she said. “Gosh, yes it is and yes, I am?” 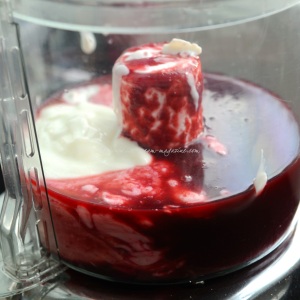 “Permit me to introduce myself Miss, I am Bruin the Undoin’ Pear. “I have your release documents and a care pear package for you. Please sign here.”
With that he handed over a brown paper package which was tied up with string.
“Here are a few of your favorite things” said Bruin the Undoin’. 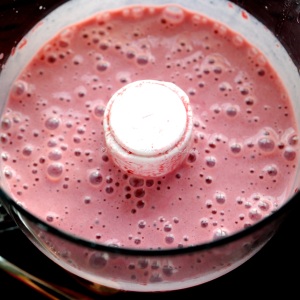 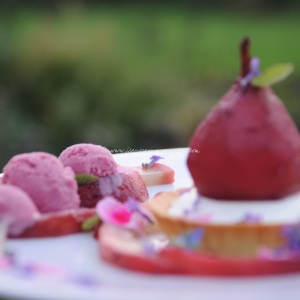 Immeasurably thrilled with her release documents she opened the care pear package which included a cable, her long-awaited pin number and a booklet which alluded to three recipes for Pears. 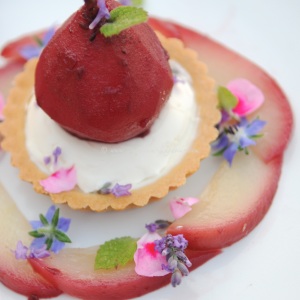 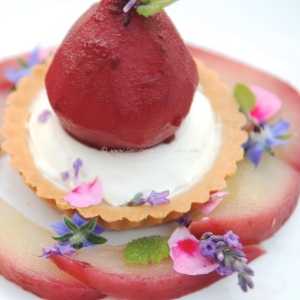 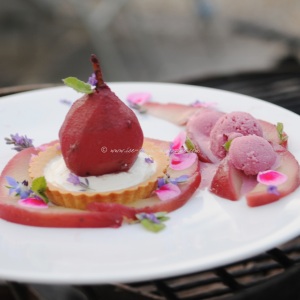 The first was for a pear spoom, the second saw the pears engulfed in a bath of crushed blackberries and lightly spiced juice, which eventually included some raw fresh honey and a single star anis. The pears, once cooled from poaching (after an over night steeping in the crushed blackberries and their juice), were made into pretty little tarts and slices.  Shown served with a sorbet, made from the residual juices, and no more, than an equal measure of buttermilk.  Process in an ice-cream machine or freeze in an ice-cube tray and whizz, in a food processor, once set, to make a tangy and deliciously refreshing sorbet. Served dressed with remaining late summer flower petals including the illusive blue borrage. 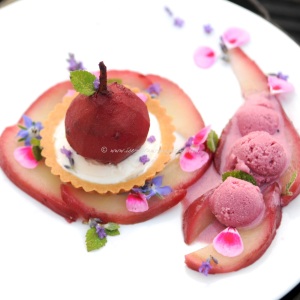 The simple basis of the method is shown in the photos and yes there were more than 3 pears, coz nice girls like to keep a spare pair or two near by!

They all lived berry happily ever after.

33 thoughts on “Mouldylocks and the three pears: Poached Pear with Blackberry, Pear and Buttermilk Sorbet”