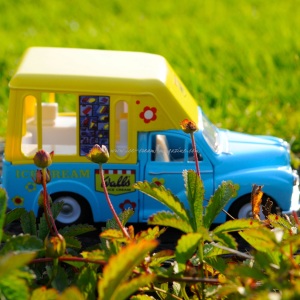 Seems one of my legal beagles has been toying with a solicitous person or persons of ill repute becoming the victim of their tardy personal hygiene. Partaking in a little extra curricular activity has left him a nasty little itch to which is now referred to as the Hokey Cokey or was it Pokey – can’t quite recall as its honeycomb over vanilla ice cream in Australia surely not within his trousers too?

His coldly forensic views were brilliantly articulated in his interpretation about his ‘feckless lack of self restrain’.  So gifted with the line, the ditty came to mind so I thought I would ask if there was truth in the theorem that that’s what it’s all about?  Apparently not, but I though it was worth an ask. Rarified banter, and us both ending up singing “You put your left foot in and then your left foot out, in out in out and shake it all about.”  A typical day at the coal face for me.

I find a Barrister (not a barista) on a roll of a rant to be one of life’s most formidable forces.  They invariably say that they are pussy cats in their place of home as they are paid to argue but I just sit back in awe at their masterful gift of savage/language/verbiage. Only too thrilled that it’s not directed as me.

Apparently he returned and remonstrated with said ‘Lady of the night’ (he was one of her regulars to boot – note: tenuous link to foot) she had then smacked him in the eye with a biscotti biscuit (twice baked, orange and almond, he’s a real stickler for detail).  To add to his nasty little rash, a bounteous black eye (which wasn’t his chosen additional extra).  I couldn’t control my stifled hysterics which is, of course, why he had contacted me in the first place. Tea and sympathy are sometimes the only kindness one can offer but mostly the best option is self-healing though wit comes wisdom. 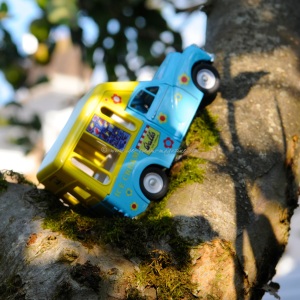 “Shall I blame a Squash ball?” “Oh no not that old chestnut.”  He said something in Latin I said something in Old English. We both laughed but were striving to find a route toward damage limitation. An urgent appointment with a Harley Street specialist now in place, a dollop of arnica, a dashing pirate eye patch and hints of minor surgery became a plot and a plan after ¾ of an hour on the dog (dog and bone – phone and not at all what you were thinking)!

He had talked himself into a better place. With his coping mechanisms and resolve now in some sort of order, we were wrapping up when I heard the tinny melancholic chimes of an ice cream van in the background.   OK said he I’m off, going to get a 99 to cheer my sorry self up.  He didn’t say self… He ran with his recently gifted ‘Old English expletive’ and was gone.

Coo, a 99. Oh, I’d quite forgotten this time-honoured aphorism. A torpedoed swirly ice cream in a luminous day-glow orange crispy cone, with a chocolate flake stuck in it. 2 called bunnies ears, if you were posh or just temporarily minted. Occasionally a synthetic strawberry sauce, poured over the powdery, cold, equally synthetic ice cream too. During the swirling tooth-pasty process there was often a wobbly recalibration of the generator which would cause the machine to pause and then shake but only once can I recall the ice cream being shaken to the floor or maybe the foot of the vendor.   More often the splattering thwack as an ice cream toppled to the floor from a small inexperienced hand, there was a brief delay before a piercing wail compounded by the inevitable mut or two, growling and scoffing the spoils.

How to address this spooky coincidence, as this will be the 99th post inter alia.   Then like a bolt from the blue, the merest ting of a light bulb moment. Time to deploy the Kraken. The Kraken known also known as Uncle Reggie. He’s 99 too!  I’ll just fast track and simply say that his anti-psychotic medication has lulled some of his more, err erratic behaviours and ‘antics’.  Under the auspices of two full-time carers Reggie is a 99-year-old ‘tour de force.’ He’s more bored than barking. Reggie, however, has a sweet tooth in fact all his own gnashers, despite his year-age, he is downright dapper.

Quite reprehensible a 99! Naturally I immediately opened a post aptly named ninety-nine. Blondie now singing 99 red balloons on continuous play in my mental jukebox. A burgeoning 99 red balloons swiftly followed by a vision of blondies, skipped to brownies and then on to flap jacks within a nanosecond. Sigh.

A flim-flam combination me thinks?  A nod to the ice cream van – ice cream and a flake and Reggies favorite flap jacks could become a 99 s’more meets ice cream sandwich with a little poetic licence? OK, maybe a lot of poetic licence.

The fella loves a flapjack usually I make them from 150 g butter, a very decent pinch of sea salt, 75 g light brown sugar, 3-4 tablespoons of syrup and about 250 g of local whole porridge oats, any proper rolled oats will suffice.

Melt all together except the oats, then add said oats stir to combine.

Pour and flatten into tin, taste mixture here and there, as if you wouldn’t?

Bake for 20-25 minutes in a medium oven. That’s heat and temperature and not a psudo-psychic oven, you understand?

Once cooked the mix will appear luscious and golden brown around the edges.  Remove from oven, cut through to the paper and after 5-10 minutes invert onto a baking rack. Peel away the paper and gently pull the flap jacks apart, leave to cool completely. Makes 12 decent or 16 if you are cautious, mean or covetous.  They will keep in an airtight tin or similar for about a week, sadly not with Reggie and his Tea Boy nephew around.

Layer two flap jacks with a remove with a corer to hold the mini ice cream cone in place. They are utterly cute and a little delectable, the mini ice cream cones are widely available on-line. For the ice cream a firm set was required so I added some maple syrup to mascarpone and froze it in a piping bag with a star nozzle attached, adding a piece of the flake for good measure. 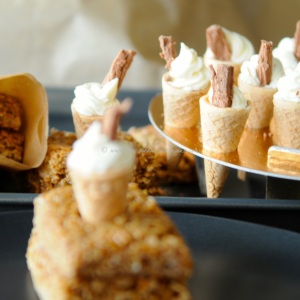 The triptych of texture and flavour is unbelievably daft and nostalgically delicious, wonderfully homely in their fabrication and so right they are beyond wrong!

Leave a Reply to The Imperfect Kitchen Cancel reply