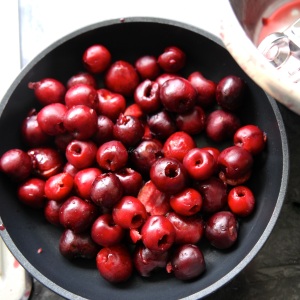 Listening to the disquiet of a verbally viscous, formidable old dragon extolling her empty regard for ‘others’, I couldn’t help but wonder if anything, other than inflicting misery gave her any satisfaction in life.  As a counterpoint, our orchard was in bloom and my attention was caught by our little grey kitten tumbling and frolicking about whilst bee bashing and butterfly hunting. 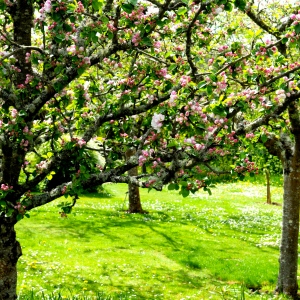 What makes you happy? I asked.  Stunned silence. “What!” she barked, so I repeated. “I’ve no idea”! Said she. Confident I could hear the sizzle of plastic as she spat acid down the phone. Barristers ‘on one’ are not inclined to pussy foot about.  “Do you realise the sort of pressures we work under!” she snapped. “I believe I have something of an understanding after 24 years, I’ll rephrase, what do you do that makes you happy”? She prickled and then momentarily rattled off a litany of achievements mostly monied, brag or travel related.

Do you have a little pet or maybe a hobby, how do you relax and spend your ‘downtime’?  I thought I’d be brave and ask.  With that, “Teddy” made his first attempt at bolting up at tree. Shocked by his semi-achievement he dropped back onto the bouncy grass with an heir of satisfaction and embarrassment, he swiftly resumed to bundle about, returning shortly after to play cat ‘on’ mouse on my desk.

“I used to bake, but I’ve no time for that anymore!” She fizzed, yet softened whilst telling of their Labrador who was put to sleep after 16 years. He seemed to have been the conduit of communication for her family.

Bake something, something simple for you and yours, take a moment for yourself. Maybe send me a picture of it please? “ I churlishly asked. Whoosh her hackles were up! “Is this your idea of (many well oiled expletives) therapy?” she snorted, yet much to my surprise she did. Between you and me, I stress counsel, legal counsel which is ‘a get it off your chest’ fix. Think cheetah/gnat wrangler. Therapists are in for the long haul. Another analogy being staple gun and glue gun v a life time of needlepoint bunnies. I digress.   A few days later I received a photograph of her fabulous circular fruit cake, (rather apt under the circumstances) the top glazed with cherries and almonds. She has since found the courage and fiscal ability to walk away from the unrelenting pressure causing her blistering and venomous angst. Her roots as a homely creative have subsequently become her salvation and saved her from the gibbering threshold of heartbreak, man mangling and burn-out.

She entitled her mail, Life is just a bowl of cherries and included the words from the chorus.  The music written in 1931 by Ray Henderson with lyrics by BuddyG DeSylva and Lew Brown.

Life is just a bowl of cherries
Don’t take it serious,
Life’s too mysterious
You work,
You save,
You worry so
But you can’t take your dough
When you go, go, go

So keep repeating “It’s the berries.”
The strongest oak must fall
The sweet things in life
To you were just loaned
So how can you lose
What you’ve never owned 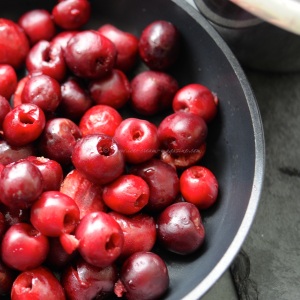 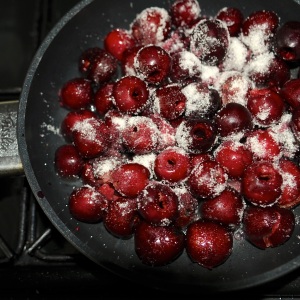 The next time she and I talked she was delightful. The once thwarted, small, grey, perfectly formed one, has since made it half way up a tree, admittedly hanging on for dear life (like a parrot in a force nine gale). Seemingly both are on their way. 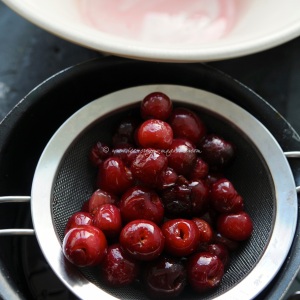 We have but one cherry tree, of which the birds claim the fruit unreservedly so I buy ours, both fresh and bottled, which helps to avoid that quasi Hitchcock moment too.

The cherry meringue ice cream for our recent ‘do’ was simple and straightforward. I needed something tasty and pronto! I unnecessarily used an ice cream maker it was academic,  as the set of the mascarpone and whipped cream gives ample volume to the generously flavored ice cream, which is both dramatic but not overly refined or elegant. A homely yet luxurious pinkish empurplement to share with friends and family.

For the fresh cherry meringues:

Drop the cooled drained cherries into the meringue mix, a few at a time, and turn and fold them in once. Scoop large spoonfuls of large awkward quenelles onto a baking parchment lined pan and cook for a couple of hours on low, low slow oven until crisp, leave them in the oven over night to become crisp and firm if possible. 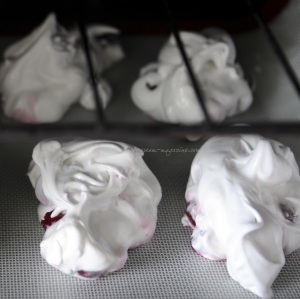 This is batch 2 which was swiftly made, using crushed store-bought meringues and bottled cherries in syrup.

I used a store-bought jar of cherries in kitsch syrup.  Yes, I’m still working my way through the Christmas hamper from hell. (I imagine the quantity of Kirsch was half a teaspoon per gallon of syrup.) 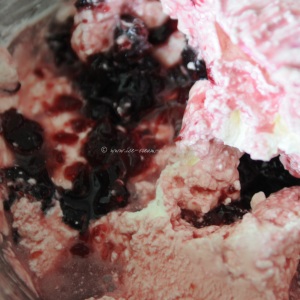 For the velvety ice cream

If using fresh fruit, wash prior to removing the stones. Add stoned/pitted cherries in a pan with a couple of teaspoons of water. A very gentle simmer with some sugar will easily suffice and they will cook through to yield their beauteous saucification. Remove, cool and then add 2-3 tablespoons of Cassis, 1-2 of Kirsch and a spritz of fresh lemon juice, simply omit if you don’t have.

Roughly 300 ml of whipped cream was introduced to a 250 g tub of mascarpone (no sugar include the syrup from the cooked cherries), cast a scant pinch of salt to avoid the mixture from becoming cloyingly sweet. The electric hand whisk was out so I used that. The creamy mix is accommodatingly compliant and swiftly firms. 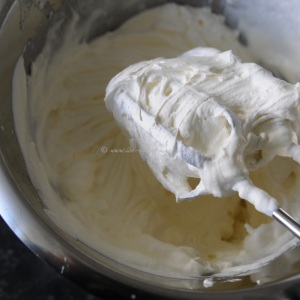 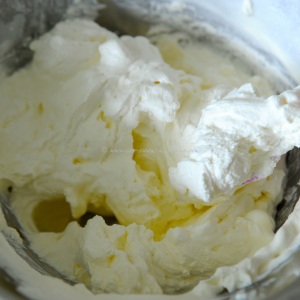 The second batch using fresh cherries, homemade fruity meringues, the fruits kindly leached their sticky jammy syrup which was all added to the luxe ice cream mix, I was fortunately savvy enough to use a silpat sheet this time. 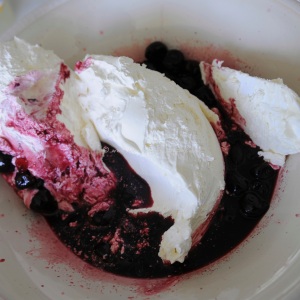 The cherries and juice were lightly folded through the mix with a spatula and since the ice cream machine was already on I used it, though once well mixed it would have set equally well. 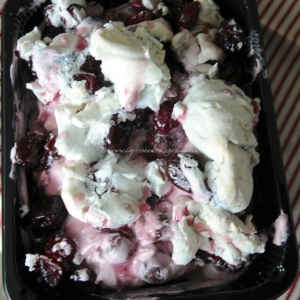 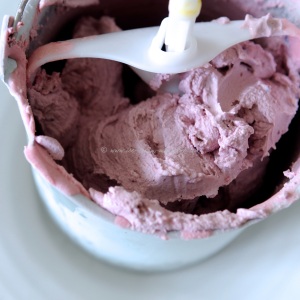 Pieces of the cherry meringues were crushed and folded through, ( yes, yes the sullen soggy broken one)  the remainder irregularly lobbed and dolloped on the top in sizable ‘rustic’ chunks.

There have been no complaints. 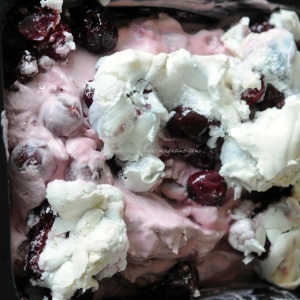 The gothic pinky purple hue from the fresh dark cherry juice is quite stunning particularly when pebble-dashed with the cherries and meringue pieces.

Maybe let them grab a spoon, dive in and just get on with it?

Leave a Reply to My Masala Life Cancel reply