Welcome to end of the lacunas. If this word isn’t a part your every day lexicon, it means the gap, an empty place, the missing section of a logical argument, the extended silence of a piece of music and in this instance I call the period between Christmas / New Year and before everyone gets back into kilter after the holidays.

Friday was ‘E’ day, my phrase for the day when the biggest hit of divorces begin after many storms of ‘Merry Christmases’ and ironically the day when millions of people will sign up to web dating sites. It was E day – E for emotion and today is Blue Monday or 4D, dissatisfaction, drizzle, debt and divorce, it is alleged to be the most miserable day of the year. January is the busiest month for divorces in the UK.

Emotional eaters so often set themselves unreasonable targets too. For those of you who don’t know I Counsel Legal Councel. The legal beagles we ordinary folk, turn to when it  ‘hits the fan.’  Their journey is no different from ours, they hurt and they bleed too, with 2 hospitalized by their ‘loving partners’ during this ‘festive’ period in my facet of Legal Land this year alone.

A client rang today to kindly berate me and/or get herself back on track from a ‘do or die’ diet regime and our conversation veered towards cheesecake, well it would wouldn’t it? We clucked and coo’d on our inclination for far too long. “There’s something quite sultry about cheesecake, creamy top on a buttery biscuit base, or maybe with chocolatey base, and dressed with chocolate shavings or better still with fresh warm berries from the garden in the summer” and on we went.

In honesty the baked variety always takes the metaphoric biscuit for me and only bettered when served with a little naughtiness and good gossipy company.  My client, however, was steeped in unreasonable expectation of dropping dress sizes and being someone she isn’t destined to be, frankly her sense of proportion was off the scale and ratcheted up a notch by the start of a new year. The now thwarted diet was a powerful and touching meditation on loneliness and vulnerability.

I endeavor to cut down periodically, yet never consider the prospect of resolution for the New Year, its like an accident waiting to happen. The mere prospect is self sabotage, causing lurid mental caricatures to oscillate about being unnecessarily bereft. My subconscious shimmies  ‘We’re under threat’, then strives and ensures it gets ‘it’ a plenty or at least dwells endlessly upon ‘it’ where upon I would end up cuddlesomely sitting on most of ‘it’ too! 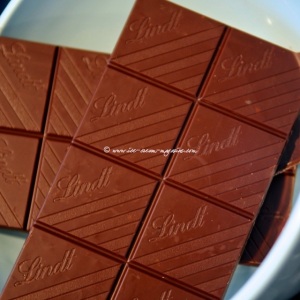 Naturally balanced Dopamine levels are key to supporting emotional responses, and will aid with ‘back to work’ tauper. For your body to make dopamine it needs tyrosine often referred to as happy brain fuel. Sourced naturally from almonds, bananas, sesame, avocado, soy, tofu certain dairy, meats and poultry and our old friend chocolate has Phenylethylamine (PEA) which elevates dopamine levels. (Ahh so that’s why it’s questionably considered better than sex!) If you have ever crash dieted, over indulged in junk food and felt a tad below par, grumpy or groggy, it’s likely that over processed foods have played a part as they inhibit your production of dopamine. Ta dah indeed but here endeth the tuppenny New Year lecture, though it may offer a little insight and comfort a constructive path. Get your mind in shape and your body will willingly follow. Your mental tool box needs the raw materials to function and keep your body on track.

Just eat a banana and a handful of almonds? Where the heck is the fun in that?

So anyone fancy a dollop of dopamine by way of a nifty little cheesecake filling in a naughty nutty basket with a few raspberries which seems less tensile on the grey matter?

To make the caramel basket I simply melted white caster/fine sugar in a pan, to a blonde caramel and poured over a single layer, in an oblong shape of sliced almonds on a silicone or grease proof sheet. The only rules for the caramel are that don’t’ take you eyes off it, use immediately and if you are a novice have a flat tray of cold water to stand the pan to stop the continuation of cooking. Lastly don’t stir, a wistful swirl is ok. Just watch it like a hawk as and when it becomes a golden colour, you are in business. Play at drizzling shapes with the residue, broken shards can become handy garnish spears, for fruit or marshmallows. Broken bits were whizzed with some edible glitter and pistachios to a mesmerizing funky praline.

Once the caramel is poured over the almonds, swiftly use a palette or kitchen knife to pull up the sides to form the triangle. In this instance I folded the sides of the silicone sheet and secured a join with tongs, in no way in search of perfection or wishing to burn my fingers with boiling sugar.

Filling the centre with ice cream is a family favourite, but in this instance half and half of lightly whipped cream added to sweetened cream cheese, (sweeten with icing sugar or maple syrup if desired) and finally add a finely chopped ripe banana (hardly rocket science, is it)? 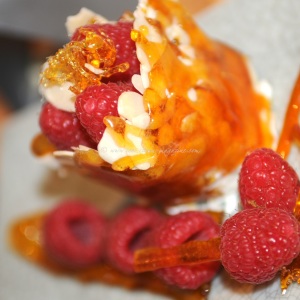 This little offering only took 10-15 minutes and can be made in small quantities if you are cutting down after all the ‘fun’.

I continue to taunt my immediates that I’m going to have a tattoo across my lower back in the form of a road sign.

It’s either that or